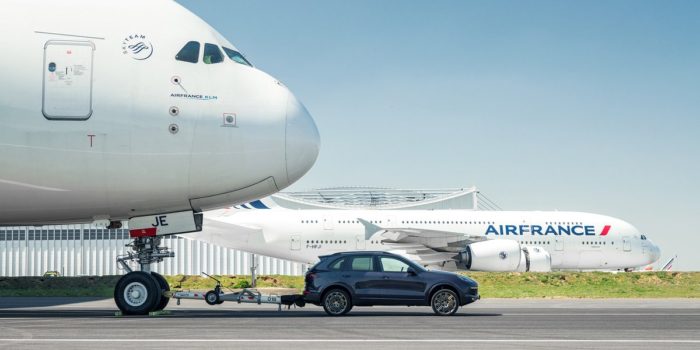 Porsche has established a new Guinness World Record in a stunt that revealed just how brawny the Cayenne really is.

The German automaker recently used the Cayenne to tow an Airbus A380 — the world’s largest commercial passenger airliner. Needless to say, this is an impressive feat considering the A380 tips the scales at about 285 tons.

How did this five passenger SUV manage to tow an aircraft capable of transporting up to 800 people and their cargo? Well, Porsche used its most powerful Cayenne models: the S Diesel and Turbo S. In total, the plane was towed a distance of over a 42 meters (141 feet), breaking the record for heaviest aircraft pulled by a production car.

The Cayenne S Diesel features a powertrain that cranks out 385 horsepower and 627 pound-feet of torque, while the Cayenne Turbo S and its twin-turbo V8 delivers 570 hp and 590 lb-ft of torque. Be sure to check out the world record feat below.

2018 Honda Accord is a Techie Sedan Worth Waiting For

Jaguar XF Sportbrake is a Stylish Wagon Bound for U.S.

Light-filled Home is Tranquil Oasis in the Heart of Seattle