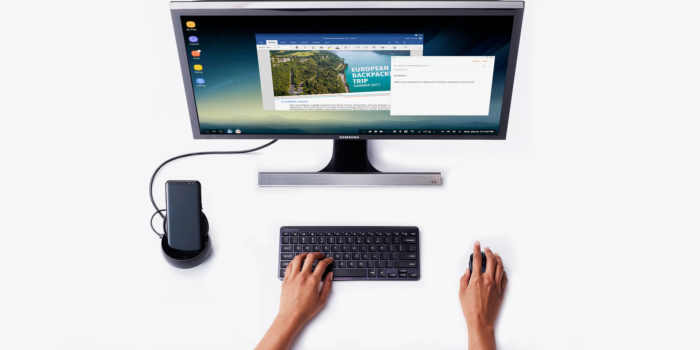 Samsung unveiled its much-anticipated Galaxy S8 and S8+ this week, both of which packed amazing specs into a glamorous, nearly bezel-less design. However, it’s other product unveiling from earlier in the week is worth noting, because it can turn your new S8 into a multitasking workstation that completely replaces your desktop.

Samsung’s DeX (short for docking experience) is a puck-shaped dock that connects an external monitor, keyboard, and mouse. Simply slide the S8 into the dock, and instantly your monitor will come to life with an Android desktop UI.

Samsung’s tweaking of the S8’s Android 7.0 Nougat OS delivers a desktop experience somewhere that’s somewhere in-between Chrome OS and Windows 10. Currently, most of Samsung’s apps are supported, as well Microsoft’s Office suite and some Adobe apps. However, more third-party apps are expected to be updated for the new desktop functionality that DeX delivers.

For anyone looking to replace their desktop computer not with a tablet or laptop, but their smartphone, Samsung DeX may be the alternative you’ve been waiting for.

The DeX dock has an HDMI, USB Type-C, and two USB 2.0 ports, as well as an ethernet jack. It also has a built-in fan to keep your smartphone cool while docked. DeX will be priced at $150 when it arrives in April. Until then, check out the experience for yourself below.

Muji Hut is a Tiny Home Built for the Modern Minimalist

Want to Simplify Your Inbox? Here’s How.