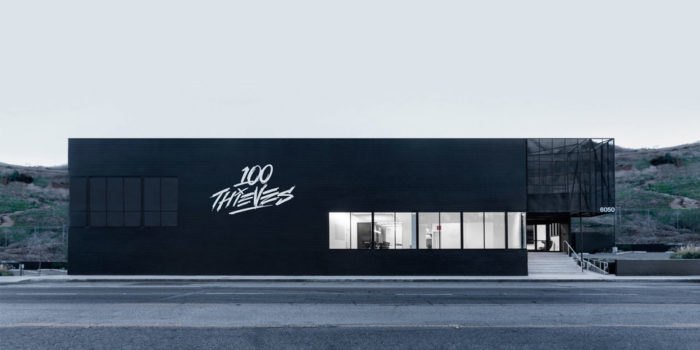 Esports and lifestyle brand 100 Thieves just unveiled it’s all-new the 15,000-square-foot headquarters in southern California this week. According to 100 Thieves, it’s the largest esports facility of its kind in the U.S., and brings together competitive gaming, content creation, and the design of streetware apparel, all under one roof.

Founded by former Call of Duty pro Matthew “Nadeshot” Haag and co-owned by Drake, has put just as much focus on their apparel business and streamers as they’ve had on competitive esports leagues, such as League of Legends and Fortnite, which as made is what made it one of the most unique gaming brands.

The new building is designed to hold every aspect of the 100 Thieves business under one roof, which the company says will be crucial for their future success. The facility includes training rooms for the competitive gaming teams, streaming pods for Twitch and YouTube stars, a production studio for shooting video and recording podcasts, a design studio for the apparel team, and offices for the more business-oriented aspects of the company. There’s even a retail space that will open for big apparel drops.

As the world of esports matures, it was also important to 100 Thieves to treat its pro gamers like adults. Creating an environment where they can train, but also enjoy actual work / life separation was critical to support their talent. Take a tour below to see exactly how they’ve structured this unique office building.