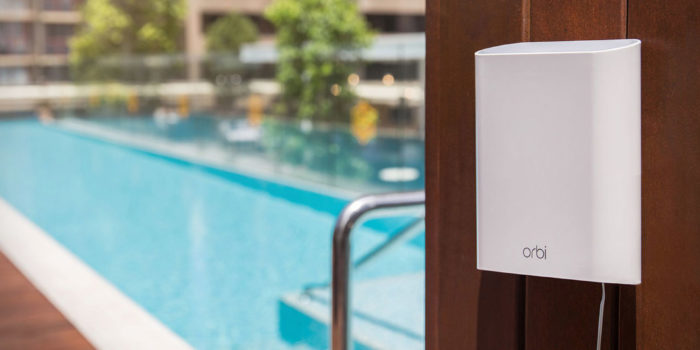 The biggest trend is networking over the last couple of years has been mesh networking, which brings Wi-Fi to every corner of your home through a series of small routers instead of just one. This setup easily eliminates dead zones and makes Wi-Fi steady and reliable wherever you may need it.

One of the many new options in mesh networking is Netgear’s Orbi, but there’s still one big area of the home left unaccounted for with devices like these — the backyard. The solution? The new Netgear Orbi Outdoor Satellite overs up to 2,500 square feet of patio, yard, and/or deck, with the same features as its indoor counterpart, including a single network name and dedicated backhaul channel.

In addition to delivering fast connectivity outside of your home, the Netgear Orbi Outdoor Satellite has also been designed to withstand inclement weather, including sub-zero temperatures, and it even stands up to dust and moisture with its IP56 rating. And of course, it’s also compatible with both Orbi and Orbi Pro systems, letting you create a seamless, all-inclusive Wi-Fi network indoors and out.

The Netgear Orbi Outdoor Satellite is available now priced at $329.99.