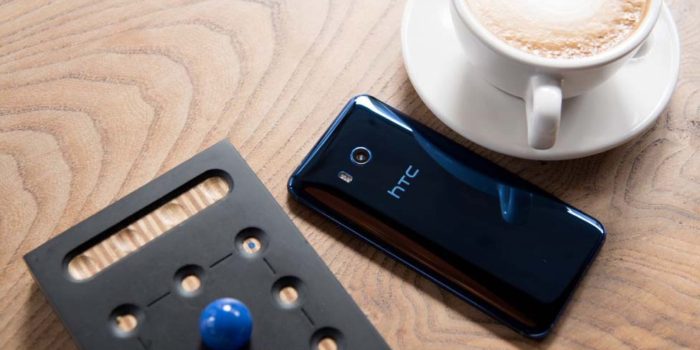 Flagship smartphones launches are increasingly dull events. Hardware gets refreshed, and specs get modestly improved. But one recent flagship launch — other than Samsung Galaxy S8 — is worth a closer look.

The new U11 from HTC boasts an entirely new way to interact with your smartphone. Thanks to new proprietary Edge Sense tech, users can squeeze the bottom edges of the handset to perform a variety of shortcuts, such as launching the camera, and snapping a photo. This new feature will probably make smartphone case makers go crazy, but it’s otherwise a cool feature that will prevent users from hunting for buttons or wondering what the shortcuts are for completing basic tasks.

Other notable features include a 5.5-inch display with a QHD, or 2,560×1,440-pixel resolution, a water-resistant rating of IP67, a 12-megapixel rear camera that sits flush on the back of the phone, and a 16-megapixel wide-angle lens that promises to take some pretty awesome selfies. With a battery capacity of 3,000mAh, all-day performance is assured while the Snapdragon 835 chipset will ensure speedy operation.

A pressure sensitive smartphone may be one thing you never thought you would want, but the Edge Sense tech seems pretty cool. And since the HTC U11 runs Android 7.1.1 and has specs that are at least comparable to the new S8, the phone looks perfect for anyone looking for a high-end phone that’s fast, has a good camera, and leverages the latest apps and software from Google. As with other recent HTC flagships, audiophiles will also love the sound quality on this handset, although it’s important to note that a 3.5mm headphone jack is absent.

You can pre-order the unlocked HTC U11 now from HTC or Amazon for $650. It will start shipping on June 9.

This New Land Rover is the Ultimate Vehicle for Adventure

Razer Phone: The Smartphone Built for Gamers, By Gamers